How do you keep track of your passwords? Is there a notebook on the shelf? Sticky notes on the desk? A paper in the drawer? Maybe it’s an Excel spreadsheet, or a Word Document. There’s always Evernote…or maybe you have a photographic memory! Please tell me it’s nothing like this: 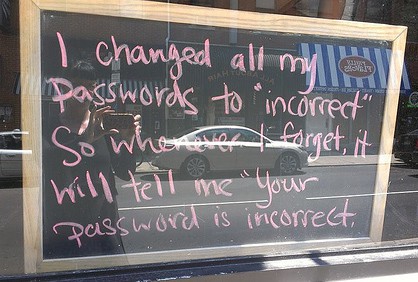 I stopped having to remember, search for, reset, and re-re-set all those stinking passwords the day I signed up for LastPass. It’s very easy to get started. Just open a free account, install the browser extension, and use the 3-dot icon [•••] to log in and out.

With LastPass you only need one password. Choose something you won’t forget, but use a trick, like the sentence trick. Think of a saying or sentence that means something to you and no one else. “In 1999 I went to Hawaii with Bill” for example. Now, take the first letter from each word plus all the numbers, in order, and you get “I1999IwtHwB”, which is a decent password.

I started with the free version and a few weeks later sprung for LastPass Pro, which sets me back $12 per year. Pro brings LastPass access to my mobile devices.

But it’s not just about password remembering. Did you ever hear of the Heartbleed bug? Google it! Confusing, worrisome and more. The Heartbleed news broke on April 7, 2014. In June of ’14, approximately 300,000 servers were believed to still be vulnerable. And a year later, a majority of big businesses had still not addressed the issue.

Most computer users I knew at the time did not even hear of Heartbleed, let alone take action…only one of my 30 or so clients checked in with an inquiry.

When I read about it, my first thought was “Expletive! Where the beep will I even begin? How the h-word will I know when I’m done?”

Butt! LastPass saved mine. I ran a LastPass Security Check, and a list of the accounts that needed a change of password was presented in  the LastPass interface. My changes were tracked as I went about fixing them – still a medium-sized job, even with the help of LastPass, but might have been impossible (for me anyway) to get it all done on my own.

I really can’t recommend LastPass (or a similar app, there are a handful) enough. Save yourself boatloads of time and help handle security risks in the future by getting set up today.

Speaking of passwords. Are you old enough to you remember the game show Password?  There was a whispering announcer: “The password is BRANDY.”

This post formerly featured a sweet episode of the show that was filmed right after Betty married the host, Allen Ludden. That video has been removed, which is one of the harsh realities of Youtube. But here’s another sweetie.